Captivating entertainment begins with a great story, and a great story starts with a great script. Are you inspired to develop an idea for a movie or turn your novel or short story into a movie script or play but don’t know where to begin? Here are five tools to help get you started.

The book The Coffee Break Screenwriter by Pilar Alessandra guides writers through script outlining, character design, and writing a logline. Use your notes on the films you’ve watched to figure out what kind of scenes your screenplay will need to match your writing genre. A producer once said that every Hallmark Christmas film has “baking Christmas cookies” and “romantic walk in the park” scenes. Pick out the common elements in your genre and figure out how to incorporate them into your story in new, refreshing ways.

Now that you’re familiar with your genre’s tone, style, and structure, it’s time to write a logline for your fresh, exciting idea. A logline—think “pitch” in the book world—is a one-sentence summary of your screenplay that gives you an immediate, clear idea of your script.

Hollywood producer Christopher Lockhart says that loglines should focus on the CONCEPT, the CHARACTER, and the film’s main CONFLICT (quoted from a Facebook group comment and used by permission). For example, look at the logline for The Poseidon Adventure:

“After a cruise ship is capsized by a tidal wave, a rebellious preacher leads a handful of survivors through an upside down hell, struggling to reach the propeller shaft and escape before the ship sinks.”

The CONCEPT is a capsized cruise ship—an excellent visual and setting, but that’s not a story. The CHARACTER is a rebellious preacher (note that characters don’t get names in a logline; they get a personality description). A rebellious preacher sounds interesting, but it’s not a story until you add the CONFLICT—trying to escape from the ship before it sinks. The conflict explains the obstacles the characters face and shows what’s at stake for the protagonist; if he fails—if they don’t escape—everyone drowns. Focus on the concrete, visual elements and external action.

Once you have a logline, it’s time to learn about screenplay structure. Blake Snyder’s Save the Cat! The Last Book on Screenwriting You’ll Ever Need and Robert McKee’s Story offer a good overview of screenplay structure. Also check out “10 Screenplay Structures That Screenwriters Can Use” by Ken Miyamoto. Once you have a foundation in structure, go to imdbs.com or simplyscripts.com and read at least ten famous screenplays in your genre. Get a feel for how other writers express the mood and tone of a script. Raiders of the Lost Ark is a thrilling read, Mr. and Mrs. Smith is brilliant at communicating emotion through action, and Inception reads so fast you’ll fly through the story! Reading scripts will show you the verbal patterns screenwriters use to thrill audiences and captivate actors, agents, and producers.

For example, Disney’s Big Hero Six is a beautiful treatise on grief combined with an exciting action plot and vivid, quirky characters. The death of Hiro’s brother pushes everything into motion. When you find out both the protagonist and the villain are motivated by grief, it creates an amazing emotional climax.

Now that you’ve done your research and have a logline and outline, it’s time to start writing! Screenwriting software is the easiest way to handle the formatting. You can start with free programs like Studiobinder and Celtx, although The Screenwriting Bible by David Trottier explains the specific spacing and margins you can use to write a script in Microsoft Word.

On a professional level, some industry experts believe Final Draft is Hollywood’s industry standard. However, Movie Magic Screenwriter is also a favorite, and a lot of screenwriters enjoy WriterDuet when it comes to collaboration.

For a quick overview on formatting, check out:

For a list of formatting dos and don’ts, look at the Nicholl Fellowship resource on Oscars.org under the formatting tab.

Need more direction in developing your script? Or do you have a screenplay that’s ready for editorial feedback? Eschler Editing’s screenplay editors are prepared to help. Contact us to set up a free thirty-minute consultation.

Julia King is a young-adult fiction author. Her love of words led her back to school to find a career in the publishing industry. She will soon earn her master’s degree in English and creative writing from Southern New Hampshire University. Her debut novel, Félicité Found, is a young-adult paranormal romance set in Paris, France. Oui, oui, she loves that city! Julia loves music, hiking, and dogs. She has almost accomplished her goal to visit all seven continents with only one to go—Antarctica. 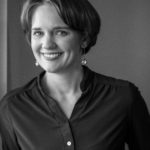 Amy Jones is a freelance editor and screenwriter who left teaching to pursue a film career. She graduated from the Colorado Film School in 2012. She followed her screenwriting nose to LA, where she wrote the web series Phonics School, the award-winning comedy script Typecast, and worked as a script reader for Mar Vista Entertainment. After returning to Utah and completing two novel-adaptation projects, she’s focusing on writing original TV pilots and features for streaming services.