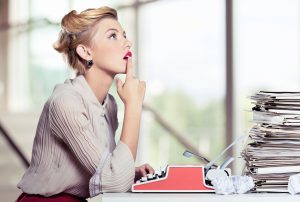 As editors, we’ve noticed that one of the tools new and even intermediate writers most often mishandle is internal dialogue. While internal dialogue (also called internal monologue) is a powerful tool the writer can use to help a reader make an emotional connection with a character, writers frequently use it in a way that diminishes its effect and purpose.

Too little and you may as well be reading a screenplay—all external action/dialogue, which means readers have no idea what a character is thinking or what motivates them. Too much and your pacing slows, and we begin to feel stuck inside a talking head.

Frequently authors use it to repeat information already offered by the narrative in another form (the most common and reader-irritating problem), or they use the wrong tense with the wrong form of internal dialogue, as well as sometimes go crazy italicizing the internal thoughts in addition to announcing “she thought” every time the character is about to think.

How to get it right

The point of internal dialogue is primarily to reveal your characters’ personalities, motivations, and viewpoints on life (which can all be seen in how they respond to situations they encounter). It’s the extra hint we need to clearly interpret their external behavior/responses. Properly balanced with action, external dialogue, and description, it can take the emotional power of your writing to the next level.

Indirect internal dialogue: One of the easiest/most natural ways to handle it is indirectly. Just flow the thoughts into the narrative without changing tense or italicizing.  Some examples:

—By the Light of the Moon, Dean Koontz

Notice how the narrator slips seamlessly between recounting the characters’ external behaviors and their internal thoughts in each of these examples. Done correctly, there is no need to even point out that these are their thoughts (“he/she thought x”). Also, the past tense remains in place, and the point of view does a wonderful job of revealing the characters’ “voices”—their personalities.

Direct internal dialogue: You want to use this form of internal dialogue for special emphasis, and the best way to present it is as if the character has spoken out loud but the words are italicized rather than set apart with quotation marks. The tense is switched from the past tense of the rest of the narrative to present tense with first-person point of view (again, as it would sound if the character had spoken out loud to himself or others; where a book is already in first person/present tense, you would not change the tense or point of view). Examples:

You can see that italicizing emphasizes and highlights moments of intensity. But just as you should use exclamation marks sparingly, the same rule applies to this technique. Keep most of your internal thought as indirect and use direct thought for special emphasis—to express strong emotions or a sense of humor or an aside. But don’t express emotions already clearly conveyed by the action, dialogue, etc., surrounding the internal thought, as that just makes the thought redundant and detracts from the impact of what you want to say. If you want to use the thought, delete the repeat information from the surrounding narrative.

You’ll also notice another thing with the Elantris and Conagher examples: the direct thought is followed right away by more indirect thought. That allows the author to expand what the character is thinking without overdoing the italicized direct thoughts, thus keeping everything nicely in balance. In the Daughter of Smoke and Bone example, that passage segues right into action, another way of balancing out internal thought. (Also, you don’t have to include “he/she thought” or announce the internal dialogue in every instance. Oftentimes the context works fine to present the thought and the italics speaks for itself.)

As a final FYI, you would never use quote marks to represent an internal thought—that is reserved for out-loud dialogue. If the character is talking to themselves out loud, then you can use quote marks.

Remember, all of these techniques have a purpose—to convey information the reader needs, reveal motives so characters seem logical and believable, and offer clues so the reader can interpret the external actions correctly. If your internal dialogue is redundant rather than illuminating, it hasn’t done its job. And remember to keep things brief and flowing so the story takes precedence and we aren’t trapped in a talking head! Well written internal dialogue is often the key to characters that readers love. And that will get your readers talking about your book—the kind of external dialogue you want! 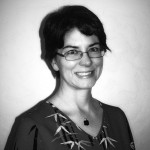 Heidi Brockbank is a senior editor at Eschler Editing. She has written and edited for a variety of companies, including FranklinCovey, Provo Craft, and Covenant Communications. She loves pretty much anything to do with the printed word, but she has to be extra careful around bookstores and libraries because they have a tendency to lure her in like a black hole, and sometimes years go by before she’s able to escape. When she’s not coaching writers or doctoring manuscripts, she enjoys road trips, photography, and playing her violin.