By Angela Eschler and Heidi Brockbank

Welcome to our fourth article in our Hook Critique series, where we review authors’ opening pages to give them insight on whether they’re creating sufficient hooks for agents and/or readers. (To get the full scoop on what this series is all about, you can check out the series introduction here.)

This week we’re touching on several aspects of choosing the right tense, as well as discovering the difference between intriguing  and confusing  the reader. 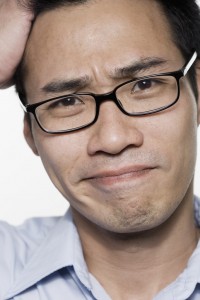 Without further ado, let’s jump into this review.

Context: From her manuscript It’s Not Me. Taffy is currently looking for the right agent for this piece (see her revision page on our next post).

Again with the yelling. My sister seriously doesn’t get the idea of sleeping in. Or how mornings should be enjoyed in peace and—

I glance at the digital Mickey clock and groan; I could have slept in twenty more minutes.

I woke all twisted up in my sheets. Norma came to me last night in my dreams. My shrink told me to write down any memories that surface. Dreams included. But what if I don’t like what I remember?

My stomach grumbles, and I decide it’s okay to get up now. My computer desk is a mess. I put away the scissors and newspaper from yesterday. The obituaries can wait. One clipping falls. I pick it up and see me. John Birch’s trench coat is thrown over my little sister and me. He’s trying to shield us from the snooping cameras. The caption reads “Teen Serial Killer or Innocent Bystander?”

I throw the paper in the red shoebox and stuff it in the closet before I slide on my cleanest jeans from off the floor. One quick check in the mirror tells me my hair is its usual mess. I flip my head over, rub my hands through and straighten up. That’s how I roll.

The shirt I wore to bed reeks like last night’s Chinese takeout. Not how I roll. I spy a black piece of fabric peeking out from beneath my pillow. I pull my favorite AC/DC vintage t-shirt close and inhale. I pretend it smells like Aiden. I haven’t lost memories of him.

In today’s fast-paced world of instant messaging and speed dating, a good story has a very limited time to convince a reader to stay and get to know it better. A writer usually has five pages or less (think of how many books you’ve browsed through at the library or bookstore and set down after less than a page) to sell the reader on what a fantastic adventure awaits them if they will commit to the relationship and read the book. This story grabs the reader’s attention right away with the main character’s unique voice and with the dreams of Norma and the obituaries on the desk. Why would a teenage girl (we assume the narrative protagonist is a girl  based on the sister calling her name, and teenage  based on the character’s sarcasm) be clipping obituaries?

A good hook contains an unspoken promise that the story will continue to shed light on the mysterious, marvelous, or magical things that have been only hinted at. Let’s take a look at one of these:

Norma came to me last night in my dreams. My shrink told me to write down any memories that surface. Dreams included.

I want all the young present-tense storytellers (the old ones have won prizes and are incorrigible) to allow themselves to stand back and show me a wider temporal perspective. I want them to feel able to say what happened, what usually happened, what sometimes happened, what had happened before something else happened, what might happen later, what actually did happen later, and so on: to use the full range of English tenses.” (“Philip Pullman Calls Time on the Present Tense,” The Guardian, September 17, 2010)

So while you have creative license to use any tense you want, consider using the tense that will appeal to the greatest number of readers and give you the most freedom in developing your story. One option you may consider is to use present tense for things such as a prologue/character introduction (Dean Koontz does a nice segue from first-person present to first-person past in the introductory chapter of Odd Thomas

effectively does this with second person) or for a dream sequence. Again, for this particular voice and story thus far, I think it’s working. (But consider these comments “food for thought” for all readers of the blog today.)

In short, if you find (through professional-esque feedback as well as your own opinion) that you are using present tense effectively and with good reason, go for it; but if you are limiting the narrative just to be trendy, reconsider.

Curiouser and Curiouser: A bit more on making sure intriguing doesn’t become confusing.

This is all interesting, but this clipping obviously isn’t an obituary, so it would be helpful to clarify (“A clipping from another section of the paper falls”) because readers are trying to figure out how that would be in the obituary section. The headline pulls the reader in with unanswered questions – is it referring to our narrator? If so, a potential killer named Angelica? Her sister? Someone else? And who is John Birch and what is his relationship to the sisters? This paragraph does a great job at packing a lot of fascinating information into a short space (which is just what you want for a first page), but might be walking the line in terms of offering too much information for the reader to keep up. At this point, I am definitely curious, but my little red too-much flags are ready to wave.

Just make sure that you don’t put in intrigue that is too much for the space allotted, making it confusing instead. For instance, there might be just a tad too many names (character intros), hints of mystery, and intriguing concepts jammed into this first page. Confusing a reader in the first pages is a bad idea since you risk losing them to a head scratch and another selection off the proverbial shelves. Since you’re on the border, consider if there’s a simpler way to hint at all this delicious mystery without overwhelming the reader with the sense they aren’t keeping up.

That’s how I roll.

The narrator has a great voice, with an assurance that is unusual for someone her age. Definitely a captivating beginning. Angelica is interesting, her background is interesting, and we’re intrigued to see where the sisters are going and what their lives are all about. At this point there’s nothing clearly at stake for the character, but the hints, and her hook-me background make up for that, I think. Just make sure to have the “what’s at stake” part of the hook come up pretty soon after the first page and keep the intrigue out of the confusing camp. If you keep working on refining your execution (how your prose conveys all this interesting info with flair and word economy), I can definitely see an agent turning the page to see what’s next.

NOTE: This critique was originally posted on author Julie Bellon’s First-Page Friday blog. Every Friday, Julie posts an author’s first page, which is critiqued by “Ms. Shreditor” (a senior editor in the New York area) or Eschler Editing. If you’d like a critique, submit your first page, double-spaced in 12 pt. font, to juliecoulterbellon@gmail.com with “First-Page Friday” in the subject line. Then watch her blog and await your place in the queue.

We’ll be posting Taffy’s final draft later this week and hearing from her on what she learned in the process. In the meantime, you can check out what she writes here:

Let’s hear from you. What is your favorite tense – or favorite example of rule-breaking tense – and why? We’d love to know, so comment below!