4 Steps to a Boat Full of Fish: The Hook

4 Steps to a Boat Full of Fish:

How to Hook an Audience 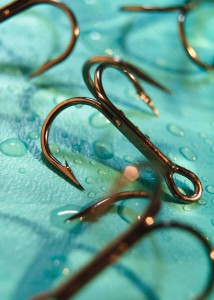 It tugs at first—a niggling, intriguing irritation you can’t ignore. With a splash and a surge, suddenly you’re racing along, gasping for breath, and barely aware you’ve taken the bait. You’re dragged, compelled, forced to flip the page, consuming the story as if you’re starved. When it’s all over, it’s four in the morning and you aren’t the person you were before.  You’ve been on the ride of your life.

It’s a difficult task to reel in readers this way, especially in our fast-paced digital world. The first 500 words (roughly the first page and a half) should be a sample of your absolute best writing, because they’ve got to get hooked before you can reel them in. (See the points below and try to tackle them all in the first 500 words of your next book. Even if you don’t leave them all in, challenge yourself to think creatively, to explore how it could be done subtly.)

If your reader puts your book down, there’s a chance he may never pick it up again.

On the other hand, when your audience is driven to read your story, not only will they finish it, but they’ll tell their friends.  They’ll pass the word along until you’ve caught so many readers you’ll need a bigger boat.

Reader satisfaction is THE  best form of marketing.

It’s also the best way to get an editor/agent/publisher’s attention and get your book in a reader’s hands in the first place.

It all starts with the hook.*

So here are four steps to hooking your reader on the first page:

1) Introduce a character your readers like enough to want him to be happy.

2) Challenge the character to his core—make him wonder if he’ll ever be happy again.

Example: This technique has actually been around for a long time, as is demonstrated by the countless number of stories that begin with a child losing a parent. Even the Harry Potter

series begins with this sort of life-changing challenge.

3) Provide some hope that happiness will be possible again after a long and difficult journey.

Example: a perfect example of this is Harry Potter’s letter from Hogwarts. The importance of this letter and the hope it represents escalates when cruel Uncle Vernon does everything within his power to keep the letter from Harry.

Example: You can Google opening lines of novels and spend hours reading intriguing lines that accomplish all of these steps. One of my favorite opening lines is from Crash

ACTION STEPS—3 things you can do now.

is about raising a child who has autism. Since autism is at the heart of the novel, some of the words I included in my list were: scream, difficult, judged, trial, embarrassed, unusual, unexpected. In my opening line, I used one of those words and tried to create the emotion behind the others. “A golden chicken turned on a rotisserie spit in the deli, the sharp smell of aged parmesan filled the air, and the pierce of Kaye’s scream made me want to crawl into a hole.”

If your hook is too dull, the reader will put the book down before the story has begun. But if the hook is too exciting, it can be a hard act to follow. You have to make sure that the next chapter isn’t a letdown. So how do you find the balance? We suggest this excellent article by powerhouse agent Donald Maass.

Now that you’ve got your hook baited and ready, let’s go fishin’!

* FYI: The term hook  is used to mean several things in the industry. The opening pages are called the hook because they create reader interest, but the marketing hook used on cover blurbs and to pitch your book to agents and publishers can be loosely defined as your fresh idea + the main conflict your character faces. This hook is tied to your premise, which you can read about here.)

Remember how we challenged you to do all of the above in the first 500 words? If you want to see proof it can be done, here’s one example of many:  Divergent

by Veronica Roth (you can read the opening pages for free on Amazon). What are your thoughts about these techniques? Any alternatives you’d like to add? What’s your own favorite chapter that demonstrates a good hook?